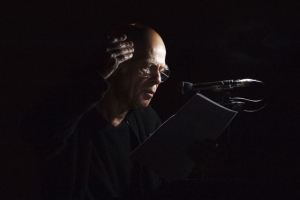 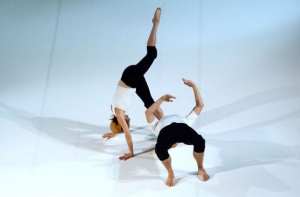 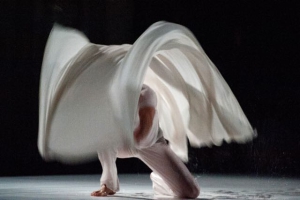 Ballet of the french language's origin

This project is born from the meeting between the writer Pascal Quignard and the choreographer Luc Petton. The concept is to give back some presence by voice and danse to the first texts attesting the creation of the french language in patrimonial places, related to History.
The first part of this series took place at the Abbaye Saint-Riquier under the title : "Life and Death of Nithard, performance of darkness"

Statement of intent :
In the majestic place that is the Carolingian abbey of Saint Riquier, Luc Petton and Pascal Quignard join forces for a unheard body and voice creation upon the "re-burial" ceremony of Nithard, grandson of Charlemagne, considered as the writer of the first French text. The recent discovery of his remains, in the very same moment that the abbey was renamed "Writing Abbey" sparked off a great emotion tinged by mystery.  Anne Potié, director of the Centre culturel de rencontre, wished to commemorate this unique instant by a creation under the form of a ceremony, entrusted Pascal Quignard and Luc Petton, choreographer in residence at the Abbaye de Saint Riquier until 218. In the Abbey plunged in darkness, the Saturday 7th of  November 2015, the spirit of Nithard lived again for a few moments, wrapped by words, steps and wings brushes, before returning  to his rest "under the stars" according to his wish.

Pascal Quignard and Luc Petton intended to enrich the creation with new texts and new danced sequences, linked to the patrimonial places that will welcome the next performances.